I recently visited a small New York staple (if you happen to be around the 14th street area) to purchase some comfort food I could indulge in. Not being someone to care about calories when it comes to comfort food, I wanted to eat some ooey gooey Cheeseburger Macaroni by the spoonful and I wanted it from S’mac.

S’mac has a great reputation among my fellow university students for being tasty and not too expensive for what it is. Having spent over 11 dollars on salad and water before, I didn’t think twice when it came to dropping some green on an actually filling and delicious meal that would last me more than a few hours.

I ordered what I consider the medium size (called Major Munch) which came out to a little over ten dollars. I ordered it to-go, since they don’t really have any seating, and prepared myself for a tasty night. I was pleasantly surprised. The Cheeseburger Macaroni was cheesy and sticky, though a little dry for my particular tastes, and I managed to stretch it out to last me for two dinners instead of one.

Because of the level of comfort I felt digging into my plate of carbs and cheesy goodness, I decided it was time to post an actual meal recipe and give people an alternative for making their own S’mac Cheeseburger Macaroni in the comfort of their own home.

Mathematically speaking, buying the ingredients for this will round out to about 15-16 dollars, but the upside is that it serves about six to eight people. You’ll get the tastiness of S’mac meal and, as with all the recipes I post, you can adjust some of the ingredients to your preferences.

1 can Campbell’s Cream of Mushroom Soup

Be forewarned, this recipe will take about an hour to make, though maybe less for you readers. I tend to take a long time to prepare my meals, just because I’m a little obsessive with chopping and slicing things so they end up being of equal size. Since there isn’t a lot of chopping going on in this recipe, you should be okay though. 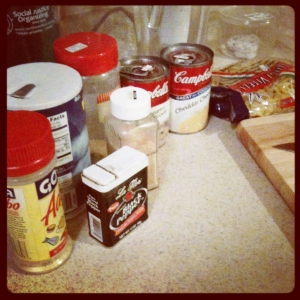 Beginning with the basics, chop your onion and set it aside. Fill a pot with water, add olive oil and salt to your preference, and set it to boil. Once it does, add the pasta and cook until tender (as you normally would cook macaroni.) 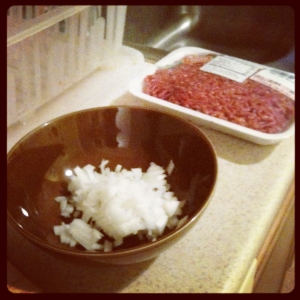 As the meat is cooking, grab a large bowl and mix the soups and cream together to form a sauce. After the meat is done cooking, while it’s still hot, add it to the cheese mixture and stir together. After this mixture is done, add the cooked pasta and again mix together. Add the shredded cheddar cheese and stir into a creamy gooey mass of cheese, pasta and meat. 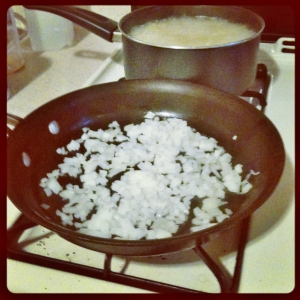 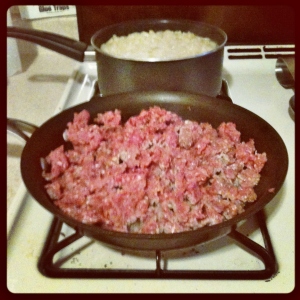 Grab your pan and spoon the mixture into it. Microwave your butter in a small bowl and mix with the bread crumbs until you get a wet sand-like consistency.

Sprinkle over the top of the pasta mix and pop this into a 350 degree oven for 35 minutes.

Once it’s done, the cheese will have bubbled together into a sticky creamy concoction of deliciousness. The breadcrumbs on the top will have formed a nice crust that contrasts with the texture of the macaroni and cheese.

This is a relatively simple meal, feeds more people than the medium sized S’mac order we (from the area) know and love, and will be a fun make-at-home recipe for anyone who wants to kill some time and have an enjoyable result afterwards.

From the many times I’ve made this, I’ve always received rave reviews! You can pair it with a light salad to maintain a balance between the heavy creaminess of the meal. It keeps well, as most pasta meals do, and pasta always tends to taste better the second time around. 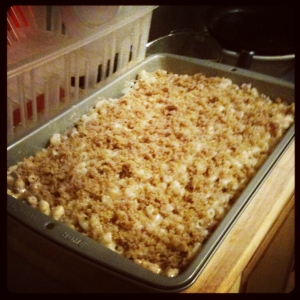 Have fun and chow down!!

← The Claire Dress by Zoe Damacela
What it’s all About: Anonymous →

4 comments on “Make Your Own: S’Mac Style Cheeseburger Macaroni”