My Journey of Hair

In January of 2008, I made a decision.  It was my senior year of high school, and a time of uncertainty.  Where would I be a year from then?  What would I be doing?  Who would I be friends with?  For most people, it’s a big decision-making time.  This decision was unlike many that others face during that time.  It was quite possibly was the biggest decision I’d made in my life, and the effects of this decision are still with me four years later.  No, this big decision wasn’t which college I would go to.  It had nothing to do with what I wanted to be when I grow up.  So what was this huge, momentous decision?  Put simply, I decided to cut my hair.

Like most teenagers, I went through my times of awkwardness, heartbreak, stress, and lots of other things I’d care to forget.  I won’t pretend I hated my teenage years.  In fact, I met some of my best friends who are still my best friends today.  I had a blast in high school, and I actually miss it.  But it was obviously an awkward time.  I was swept up in a whirlwind of nerves, excitement, and terror for what would happen in the upcoming months.  Graduation and the start of college was the biggest change in my life up until that point.  Before that, the biggest change was probably when I got bangs freshman year.  It’s beginning to seem like my biggest life decisions revolve around hair …

Anyway, I guess I must have been ready for all that change.  Or I wanted to think about other changes.  I’m not really sure what I was thinking, to be honest.  But in January of 2008, I walked into my salon and said, “I want Victoria Beckham’s haircut.”  If you all think back four years ago, Victoria Beckham rocked an asymmetrical bob.  A short asymmetrical bob.  Up until that point, I didn’t rock much of anything, but I had long, straight hair with (sometimes awkward) bangs.  Before you judge the photos below, keep in mind that I was in my admittedly awkward years. 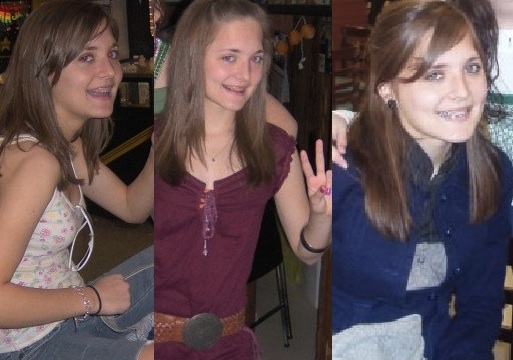 So what was it that made me ask for such a drastic change on that fateful day? I’m not quite sure.  I don’t remember thinking much about it.  I printed out a photo of Victoria Beckham, walked into the salon, sat down, and … 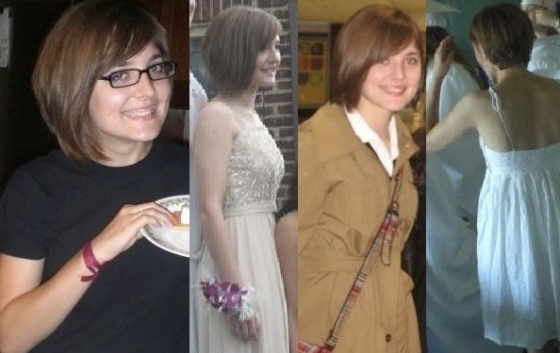 I chopped it all off!  The last photo there shows the back of my head.  Just so you know how short my hair was in the back, they had to shave my neck.  When guys get their hair cut, the barbers shave their necks to clean up the hair line.  My hair was so short that you could see where my hair met the nape of my neck.  Now, I understand that there are plenty of girls who cut their hair even shorter than this, but to go so quickly from long, past-my-shoulders hair to neck-shaving hair was a big deal for me.

The “After” caption in my short hair photos is slightly misleading.  My hair journey didn’t end with my asymmetrical bob.  I rocked the Posh Spice look for about six months before officially deciding that I’m too much of a girly girly not to put my hair in pony tails, braids, and buns.  I struggled for years through awkward lengths, demi-pony tails, avoiding trims at all costs, and even taking special vitamins to try to make my hair grow faster.  The day that I was finally able to put my hair completely into a pony tail was one of the best days of my life. 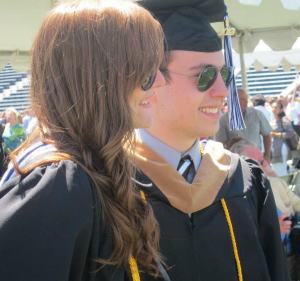 My goal for four years was to get Miley Cyrus’s down-your-back hair.  I wanted to be able to curl it, straighten it, and wear it all kinds of ways.  Today, my hair is quite possibly longer than it’s ever been.  I can wear my hair curly or straight, I rock buns and braids, and I’m loving it.  To the right is the best photo I have to show you how long my hair has actually gotten in the past four years.  That’s my hair curly, so it’s even longer when it’s straight.  My hair is Miley Cyrus’s down-your-back hair.  I wear it curly, straight, braided, and everything else I’ve wanted.

My hair journey might not end here.  I might decide when I’m older that long hair sucks and I want to chop it all off again.  For now, though, I feel like I’ve really grown into my hair.  Or my hair has grown on me.  Regardless, I’m happy with it, I’m having fun with it, and I’m loving it.

Kathleen is the style editor for The Collabor-eight. She's a 23-year-old true Jersey girl; big hair, bigger heart. Her passion for beauty and makeup started with an internship at Seventeen Magazine and has grown ever since. After graduating from Villanova, she turned her love for Facebook, Pinterest, and Twitter into a full-time job as a social media coordinator! When she's not at work, she's browsing everywhere from the Internet to the streets for her own "Manicure Monday" inspiration. She believes that true style comes from a mix of high and low, designer and drugstore, expensive splurges and nearly steals!