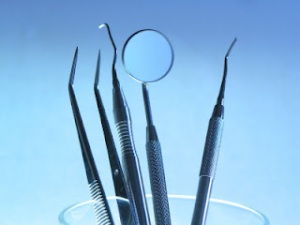 Getting my braces removed at the end of high school was complete bliss. I ran around for months in total excitement, licking my shiny teeth, and of course, not wearing my mandatory retainer. Eight years later, I could fit two of my fingers in the space between my top and bottom jaws when I bit down. Bucktooth Betty was back and there was no fighting her without some investment.

It was time to look into Invisalign treatments. First stop was a shop I passed on my walk to work one morning: The “Smile Café”. The staff inside was just as used car salesman as the name of the place. A male oral hygienist took x-rays before asking, with a heavy accent and a curved Elvis lip, if I had a boyfriend.

“Sure do,” I lied through my overbite.  If only he wasn’t so sleazy, this could have worked out.  The whole white coat get-up was a turn on and his office was relatively close to mine.  But in any case, the quote he gave me was way out of my non-profit earning price range.  My perfect teeth and boyfriend would have to be found somewhere else.

Then a co-worker recommended the dental school right down the street from our office, where the students did Invisalign for almost a third of the price. I did the math, figured no major organs were involved, and realized that any treatment gone wrong would be an improvement over the current disarray of my teeth. Plus I would be in a smart dental school environment – hello, husband hunting.

Three days later, I was sitting in the waiting room filling out paper work.  I dressed up for the occasion and even straightened my hair, which made me stick out in that waiting room.  Pretty sure the homeless man I sometimes pass on the corner of 31st with less than 12 teeth was waiting next to me.  I buried my head in US Weekly.

“Heidi?” A blonde, athletic looking guy in a short white lab coat scanned the waiting room.  No older than 25, no taller than 5’8”.  I stood up enthusiastically, bummed out about his height, but more excited that Bucktooth Betty was on her way out, and that this character was cute.  Striking green eyes and well-toned build – even under his lab coat, you could tell he was no stranger to the gym.  He shook my hand firmly, perfect Crest commercial smile luring me in completely.  I imagined how fabulous our meeting story would sound to our kids.  Goodbye, Lower East Side dive bars.

We proceeded to walk into a maze of dentist chairs surrounded by clusters of dental students in white lab coats.  Around each patient stood an older professor and about five or six eager students.  Muscles led me to an open chair where he nervously made some joke about the professors, and began to examine my chompers.  The proximity of his face to mine, paired with his white lab coat and dental tool skills made my heart race.  He began shouting numbers to an accomplice on his left as he poked each tooth.

“26 top incisor, clear” he began.  Guess that was a good sign.  When he got to my bottom front teeth he stopped at my fused tooth, wrinkling his brows in confusion.

“Um,” he let out.  I smiled, wanting to see if he can figure out my freak tooth on his own.  Two of my teeth somehow stuck together and grew as one, giving me an ultra-wide tooth on my bottom row.  Apparently a very rare find in the world of dentistry.  I remember my last dentist even calling over his office buddies to check out my clown tooth.  Muscles Matt looked up from my mouth and called over to an older man for help.

“Well, well!  We don’t see this too often!” the professor exclaims.  Then the worst:

“Class!  Come check this out.  Everyone gather around.”

Awesome.  He didn’t even ask my permission, let alone address me before stealing the tools from Matt and prodding my teeth.  I had rapidly turned into the circus patient.  Swarms of students began to gather, while the professor smiled, warming up to his lecture to come.  My palms turned clammy as I tried to smile and laugh off the tooth, as if it was a mistake I made on a drunk Friday night.

“Class, this is a fused tooth.”  He dropped a whole bunch of dental terms that flew over my head like my chances with any cute dental student.  I was staring up at 25 pairs of eyes, all of them focused on my ultra-wide tooth.  One kid even started taking notes.  I wanted to bite the professor as hard as I could and now was my chance.  I held back.  The lecture ended.  Eyes began to meet mine as students began to throw me pity smiles.

“Thanks for the lesson!” one girl exclaimed.  No problem, guys.  I’m glad my deformity advanced your dental careers.  I scowled at the professor, who tapped my shoulder in appreciation and went back to his work station.  Students scattered away and I was left looking up at Matt, his face cringed in complete embarrassment for me.  Where was he during all of this?  Why did he allow me to become a Coney Island sideshow? I began to question the potential for a long-term relationship.

“I am so sorry,” he admitted.  “Let’s get back to work here.”  The poking continued as he barked out numbers and dental jargon, which his tall and lanky classmate was scrambling to write down.  After examining each tooth, Long Limbs handed him a piece of paper with four lines of scribble on it.  Matt looked nervous.

“OK exam done.  Follow me.”  He led me over to the x-ray machine and began small talk as he placed that 200 lb “anti-radiation” jacket on me.  Between x-ray pictures, I learned he went to a neighboring college to mine, and graduated the same year that I did.

“I was at Brownie’s every Friday for happy hour,” he started.  “Who can beat $4.50 for a six pack of bud light?  My buddies and I would get loaded.”  I agreed and didn’t remember a sober Friday at Brownies, although I was uneasy mixing bar discussion with radiation and tooth drilling.  He disappeared to get the x-rays and then led me back to the chair, x-rays and scribbled paper in hand.  There was an awkward silence.  I could tell he was hiding something from me, something too painful to let out until I was seated.  Under normal dating circumstances, it would be too early in our relationship for such a moment, but this was dentistry, not a singles bar.  He snuck in a big breath in and began explaining his unfortunate findings.

“So you’ve got a few cavities.  Every line written on this paper is a cavity.”  He showed me the scribbled paper with four visible lines of dental jargon.  I didn’t remember the last time I had a cavity.  I also didn’t remember the last time I went to the dentist.  My toothbrush got used on a daily basis, but my dental floss was more of a dusty decorative piece in my medicine cabinet.

“We can’t fit you for Invisalign until you clear up the cavities. I would suggest going to your dentist for this.”  Good suggestion, boozehound.  There was no way I was letting Brownies’ best customer stab me with a Novocain needle.

Until he offered me a deal…

**Tune in next Tuesday to find out what happens next!**