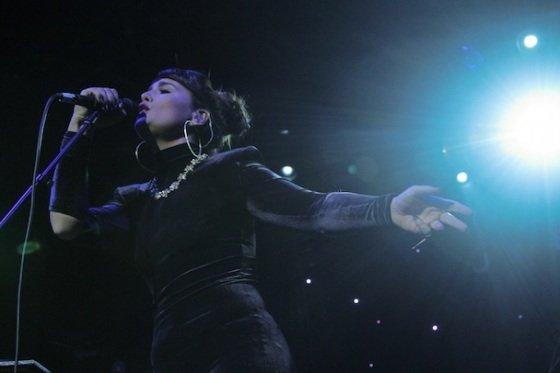 Since I wrote about pop soul singer Jessie Ware on The Collabor-eight back in October, she’s been featured on Beyoncé’s Beyhive Blog, gone on an international tour (and now on her second), and collaborated with A$AP Rocky to get her single “Wildest Moments” remixed and ready for U.S. release. I was fortunate enough to snag some tickets to watch her sold out show on April 5th at Webster Hall in NYC. Read about my experience after the jump:

This was actually my first time at Webster Hall so I wasn’t sure what to expect in terms of the space – all I knew was that it transforms into a club with a questionable reputation at night. For whatever reason, I took a deep breath when we went down to the basement for coat check and my nose was greeted with the smell of sweat, desperation, and a hint of regret – all remnants of the nightclub’s clientele, I’m assuming. Smell aside, the well-worn grand ballroom on the main floor has sizable floor space and a large balcony hanging above, which adds up to a capacity of about 1500 people. There were two large bars within the ballroom, one of which I got a cup of Jameson and ginger ale from. How are the drink prices? Well a regular plastic cup of that was $11 while the large one was $18 so judge for yourself. In summation, Webster Hall is awesome for live music…just don’t count me in for a night of dancing there.

The self-described “Tumblr glitch pop” band MS MR (pronounced ‘miss mister’) went on at 8 PM. They played songs from their EP Candy Bar Creep Show and upcoming album Secondhand Rapture. Before we all knew it, 30 minutes went by and lead singer Lizzy Plapinger announced that they’d be playing their last song for the night. MS MR was a lot of fun to watch and listen to – so much so that I’ll be writing in more detail about them in a post coming up later this week.

At this point, I managed to wedge myself in a place where I was only 2 people away from the front, in the middle, and away from tall men which made for an awesome view. After waiting what seemed like 2 hours (in reality, only a half hour) for the crew to break down and set up for the main act, the stage lights dimmed and the 3 piece band began to play the intro to Jessie’s title track “Devotion.” Jessie finally arrived on stage in a dress by Hannah Marshall and her hair in her classic updo. The recorded version of “Devotion” is a very laid back, downtempo song and somehow she was able to build it up and naturally sneak in her powerhouse vocals (4:25 in the video below). When she sang the last lyric and flashed the audience a smile, I turned around to my friend/concert buddy Ryan and simply said, “Wow.” And that was only the first song!

On the set list: 10 of 11 songs from Devotion, an acoustic version of her cover of Bobby Caldwell’s “What You Won’t Do For Love,” and a new ’90s dance-inspired track “Imagine It Was Us,” which will be on the album re-release. Jessie also performed “Valentine” with her talented drummer Dornik Leigh, a song she originally did with singer Sampha:

This lady is extremely gifted and a must-see performer. Her voice is even more mesmerizing in its live form. Songs like “Taking in Water” and “Night Light” took on a different meaning because of her fantastic storytelling ability while singing.  The performances weren’t the only highlights of the night though – Jessie’s personality charmed the heck out of us. She recognized and called out a fan that also went to her Philadelphia show back in January and pointed out another fan to wish him a happy birthday because he told her through Twitter that he’d be celebrating with his boyfriend at the show. Down to earth? Check. Hilarious? Check. Incredibly cool? Check. Now I need to figure out how I can become best friends with Jessie Ware. Keep an eye out for her album Devotion, which will be officially released in the U.S. on April 16th.

Check out my (very) amateur iPhone video clips below:

The last song of the night, “Running”: