This annual fashion show sponsored by Victoria’s Secret has been around since 1995 but it didn’t start getting televised until 2001. I started watching in 2005 when the big name supermodels were still around – Gisele, Tyra, Naomi, Heidi – and the lineup has changed pretty significantly since then. What’s most fascinating about the Victoria’s Secret Fashion Show is their ability to turn regular lingerie into couture pieces. Besides the new stuff they come up with every year, I look forward to the runway music. Lately they’ve been focusing more on live performances accompanying the show and it’s become more evident this year. Check out my breakdown of the music (along with some commentary and pictures) from last night’s show!

Adriana Lima burst out onto the runway to a slightly remixed version of “Break On Through (To the Other Side)” by The Doors. As the whimsical collection continued, The Doors suddenly transitioned into the very familiar “Get Ur Freak On” by Missy Elliott. I really loved this part because it was so unexpected. Not long after that was Billy Idol’s “Rebel Yell” which brought a thumping punk flavor to this segment.

Bruno Mars performed “Locked Out of Heaven” with his swaggerlicious band. They did a similar performance when he was a host/guest on Saturday Night Live but what was especially cool during this one was when they all came down the runway as a group. I couldn’t help but laugh when I saw Bruno standing next to one of the girls – he looked like he was small enough to jump into her pocket. In any case, Bruno Mars is a charismatic, natural performer which was thoroughly enjoyable to watch. The collection had an cute concept with each girl’s outfit representing a different month of the year. The designers described it as “’50s nostalgia” and Dita Von Teese-inspired.

The Biebs started out with an acoustic version of “As Long As You Love Me,” complete with his own spin on Big Sean’s rap verse. I wasn’t paying much attention because I already saw this same performance during the American Music Awards, but he was still good. This part felt a little out of place because nothing else was happening besides him sitting down and singing.

Justin Bieber and the energy of “Beauty and the Beat” were really appropriate for this PINK segment. Young and bubbly, this was a fun collection to watch unfold. Biebs’s dancing was a little questionable at some parts but I have to remind myself that this isn’t So You Think You Can Dance.

Bruno toned things down a little bit with the piano and harmony driven “Young Wild Girls.” The collection for this segment was stunning. Each look had that soft, old school glamour. Favorite part of the night! 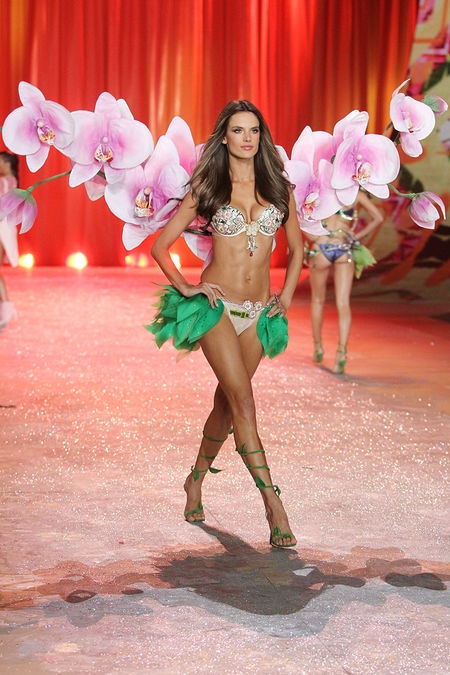 Rihanna performed “Fresh Off the Runway,” something I predicted would happen last night. This is another song off her latest album. She said in between segments that she was still learning the lyrics to this one because at that point in time, she had just recorded it. During some parts of the song, I wasn’t sure if she was making up words or not. I found it delightfully cheeky (no pun intended?) that Rihanna was unabashedly checking out the girls. She even did her own little walk at the end and it suddenly turned into the Rihanna Fashion Show sponsored by Victoria’s Secret.

Rudimental’s “Feel the Love” featuring John Newman played as the models came out for their final walk on the glitter runway. I was really pleased with how this 2012 show came out, even though it wasn’t too heavy on a variety of music like it used to be. Here’s to next year!